Dear Fannie
I left Cusseta the morning after I left home—lay over in Montgomery until next morning, came on the cars to Mobile got here last night at 10 oclock without any accident to myself or Negroes. Our Negroes were put in a cotton [ ? ] which is a very comfortable place for them. I drew plenty of provisions for them and myself, fresh pork, meal & peas – the overseers tell me that sometimes they draw very little provisions. There is a good deal of sicknefs among the Negroes down here, has been several cases of small pox among them. I have not gone out to the fortifications[1] yet; my negroes have got to undergo an examination by an army surgeon before they go to work. The overseers are furnished a very comfortable room to sleep in; a Negro to cook for them. From what I have heard here I don’t apprehend any danger of being conscripted[2] as long as I have the Negroes in charge. Tell Father that I got in company with Sim Copeland, Lanier [?Cason?] is coming down: he says that Tom Pearson, the man that bought Sim’s land in Pike Co Ala, died last fall in the army; he says Pearson had sold his land before he died and he rather thinks that his estate has been administered on. I think Sim’s business down there should be looked after.

Send our buggy over to Father’s. You can send over there for it when you need it. Keep the harnefs and my saddle in the house. Write soon and let me know how how [sic] you are getting on. Direct your letters in Mobile Ala. Your husband
W.R. Anderson

[P.S.] send me a couple of fish hooks in your letter with lines on them. 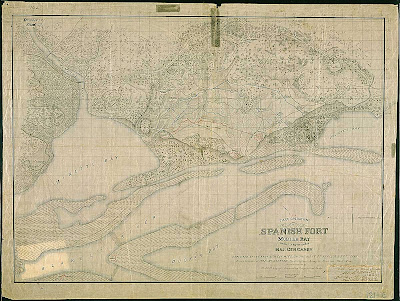 [2] It was thought that because Wm. Anderson was a slave owner who offered his slaves in service to the Cause, working on the fortifications outside of Mobile, that he would not be conscripted. It becomes apparent as these letters progress, that at some point he was drafted along with his horse(s). Wm. eventually became part of the Eighth Confederate Cavalry, seeing action at the Battle of Shiloh and becoming part of "Beauregard's Retreat". He spent the rest of his time in the service trying to buy a substitute and make his way home.


HISTORICAL NOTE: "Because the south had fewer people available, they began a controversial draft in 1862, a year earlier than the north. All men 17-50 were eligible for duty, except for slave owners and overseers. Conscription was so unpopular in the mountain areas of Northern Georgia and Alabama and Eastern Tennessee that the Confederate officials did not attempt to enforce it. As the war dragged on and casualties mounted, the south became more desperate for soldiers." click here for more info
Posted by Vimala at 7:00 PM