The Pauline Yates Correspondence I

The Anderson Letters
The PAULINE YATES Correspondence I
archive item #21

Return address on back:

Lineville Ala
June 22-1969
My dear Earl,--
It was so nice to meet you and I am so glad you wanted to come to see me--!
After you left, I thought of a number of items, maybe? of interest to you in compiling data for your book-
Im reading books, which I've always done since I was a small child, I have noticed that books that contain anecdotes or personal stories always appeal most to the reader-so that's what I want to add to the other information that I gave you -
Of special interest to me has been - Despite the fact that there were no schools my father and grandfather managed to educate all their children - Papa taught school a while himself, after his return from the war - Then he had tutors and we had governesses as well as nurses until we did'nt need them! Your great-Uncle Bob got enough education to enter Mercu/Mercee/Mercel [???] and after one year he went to Auburn! He was at Mercu [???] when my father married my Mother!
Then when the public schools opened we drove a horse and buggy to school - Hard on us and the horse--!
Now about the place-looking and being a Negro house! Its been 61 years since we left there - It broke my fathers heart to leave his home and land that he truly loved. [2] But he was past 60 years of age and he had reached the point where he couldn't get the tenent farmers to work! Of course he could'nt do it him self and he did not have the patience to cope with them. There was a beautiful grove of trees to the South front of the house - In the grove out of sight and sound of the house were the Negro quarters - five houses in my youth - and over the creek was one other-
These people farmed the land on what was called halves! The owner furnished the mules - plows, wagons, and farm equipment, as well as the house, food and wood for the families! for their fuel! I'd hate to have to do that now! Then there was a gin house and black smith shop where they did their own cool repairs! Bob ran the gin - It was not for the public - Only our cotton and Bob's was ginned. When they finished that, it was closed until next year!
Now another note you must remember - which will explain why there were so many private cemeteries up the River - that had to be moved - [1] When one of these families died they were buried on their own land--! The people who were buried in city cemeteries were paupers! And considered as such - do you remember in reading "Gone With the Wind" the scene of the five Negro slaves and neighbor carrying Mr. O'Hara's body up to the back of the house and burying him on his own land "Tara"?
It was a custom of that day time, and section-I don't know if it was done in the North or not. Probably not!
Now this is a bit of a whimsy! Our place was considered to be haunted, or as the Negroes always said "hanted"! There was an old attic over the back part of the house. Where things were stored - my mother said she tried several times to send one of her Negro maids up after some item and they refused to go! It was the old part of the house and a former owner "Mr. Comberlander" was supposed to be up there at all times! Part of this story probably came from a natural condition - Our place was between the river and a creek. and all the woods and trees and rotting leaves caused Fox-fire or Will-O-the-Wisps!
Sometimes at night a ball of phosphorous (spelling?), would roll along by the side of your horse as you rode - Your great Uncle Ellis believed in the ghosts and loved to tell of how they would escort him and his horse home - It was lighter than air and just a wave of your hand would make it move away -
John Anderson who lived at Grand father's place used to sit on the steps, and watch. He said it looked like fiery pleums[ ? ] which beckoned and waved --! Enough to frighten anyone!
Jeanette Anderson Whittaker one of my contemporaries said she was surely disappointed in her papa--! She said she expected some unusual phenomina -like a sleight earth quake or some upheavel of nature when the U.S. Engineers dared to disturb his bones and add insult to injury move him off his beloved land!
Another thing that might be of interest is that my father was the Judge and settled all the disputes and quarrels among the Negroes on the farm. I remember on Sunday mornings papa would sit out on the front porch and they would come and sit on the steps and air their grievances! He must has been a physcologist as they seemed to go away satisfied!
Now my dear Earl, I'm afraid I've bored you to tears - and you may have to get some one else to read this for you -
By the way I'd like to have your address so that if I have any thing that may be of interest to you I could send it to you - With all good wishes for a successful life and may the book become a reality - Aff - Aunt Pauline

[1] Private cemeteries were moved by the U.S. Corps of Engineers as part of the West Point Dam Project during the 60's. 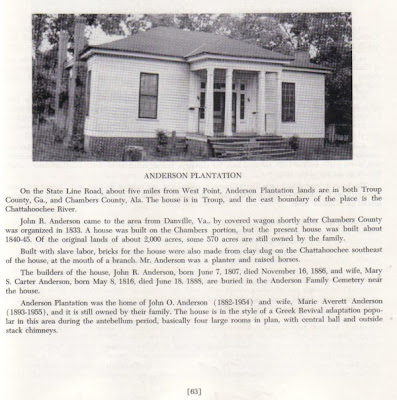