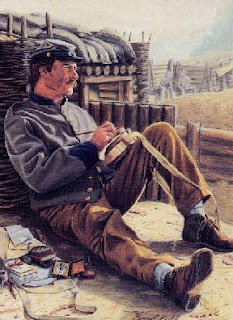 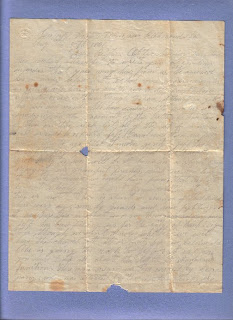 Dear Brother. After having been here two weeks I attempt to write you a few lines in order that you may hear from us. We arrived here on Monday before last, we had some inconveniencies in getting up here, we had to ride on old freight boxes with no cover on them through the rain, Although we got here safe and sound. we have discharged two members of the company, on the account of their health. We have two or three on the sick list, all of the rest of us are as well as could be expected. Jess Haralson [2] told me just this minute ago that Lincoln sent Jeff Davis a white flag yesterday, so if that be true, the probability is, we will be at home in a short time enjoying our peaceful firesides, which we now long to be at, provided we could have peace, that report is not reliable yet, I don’t know whether it is true or not. There is an average of three killed here every day, some by guards and some fighting. I suppose there is about 40 or 50 thousand soldiers here. Jeff has been fixing up for the city of Washington, though we don’t know whether we will have the chance at it or not, for we believe old Abe is going to nuck to Jeff. I suppose you have heard all about the battle of Manassas Junction [3]. There was a Negro up there carried by a company, who was attacted by two northern troups while he was out in the woods, he killed one of them with his big kife [sic], and took the other one prisoner, and he was allowed to bring him down here, and deliver him up in the prison. We have a lively time up here. We have the most civil company in the whole encampment, I think and the stoutest one on the ground here. I meet up with a great many of my old friends, daily, in different companies &c. I am sitting down on the ground writing on my knee, with hundreds of soldier all around me. this is Monday morning, good many are drilling at this time. I have just been looking over a Richmond dispatch [4], though there was not any news of any great importance. My mind is flustrated I cant scarsely think of any thing to write, there are so much confusion going on, so many mouths going on at the same time. I received a letter from Eliza Saturday, with a great deal of pleasure. We don’t know when we will have to leave here, we received marching orders some time ago. Write immediately, if you think any thing of your humble brother. Back your letters to me, care of capt Boykin [5], Richmond Va Give my best regards to all enquiring friends, and tell them we desire their prays [sic] We are all very well satisfied with our fair. I have seen more since I left home, than I thought I ever would see. Nothing more until I hear from you. Your humble brother Jno R Anderson 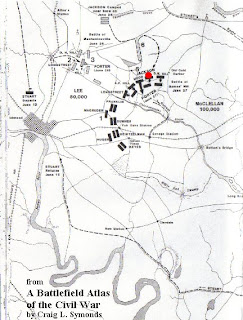 John R. Anderson was born in 1838 in Troup County Georgia, son of John R Anderson and Mary Susan Carter Anderson. He was married (most probably to Eliza as mentioned in this letter). He had no children, no property, no slaves. He was mustered in to the “Ben Hill Infantry” on July 9, 1961. This unit became Company F, 21st Georgia Infantry.

A man named Ujanirtus Allen served as a lieutenant in this company. His correspondence was recently published by LSU Press, under the title A GEORGIAN WITH “OLD STONEWALL” IN VIRGINIA. In these writings he mentions John R. Anderson twice. On June 30, 1862, three days after the battle of Gaines’ Mill outside of Richmond, Allen says, “John R. Anderson was mortally wounded in the head and died yesterday evening.” In a letter dated July 2, 1862, Allen states “John Anderson died June 29th from a ball that entered the brain on the left side above the ear.”

Upon being wounded John Anderson was carried to Starke House Hospital (view here). Starke’s Hospital was the family residence of Joseph Starke and was located not far from Walnut Grove Church on route 636.The present entrance is on route 360 and the subdivision located here takes its name from the old site. In September 1978, an historical marker noting this site was dedicated in ceremonies at US 360 near route 643. In 1931, the house was dismantled and the material, wood, mantels, floors, etc. were taken to Williamsburg to aid in the restoration of the old homes there. 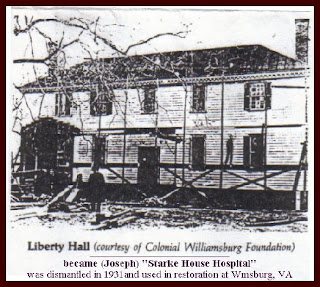 A July 4, 1862 piece in the Richmond DAILY WHIG states the following:

“WOUNDED IN THE COUNTRY—A large proportion of the soldiers of General Jackson’s Division, who were wounded on Friday last, are at the “Starke House Hospital,” in Hanover county. Dr. Hancock*, of this city, is the Surgeon in charge—a guarantee that the patients are well attended to. The ladies of the Neighborhood are untiring in their care of the brave “boys” who contributed to their release from Yankee thralldom.” [*Dr. F.W. Hancock, Chief Surgeon, 3rd Division, Surgeon in Chief of Hospital]

[1] “Camp Instructions” was established at the Fairfield Racetrack, about two and half miles outside of Richmond, VA. The camp was also known as the New Fairgrounds. This was the second campsite occupied by Anderson’s company when it reached Richmond. They were there by July 28, 1861 and remained there for roughly a month. At that time the company was part of the 4th Georgia Infantry Battalion, and organization later expanded and re-designated the 21st Georgia Infantry.

[2] Jesse Burgess Haralson, Jr. enlisted in the Ben Hill Infantry on the same day as John R. Anderson. He received promotions to sergeant and lieutenant later in the war.

[3] This refers to the first Battle of Bull Run (July 21, 1861), a Confederate victory under Jackson’s leadership. Soon after, Anderson would serve under General Thomas “Stonewall” Jackson in the Shenandoah Valley Campaign.

[4] The RICHMOND DISPATCH was one of the large newspapers in the Confederate capital.

[5] John Thomas Boykin, Jr. organized the “Ben Hill Volunteers” and was the company’s first captain. He was apparently popular with his men and served as captain of Anderson’s company until May 31, 1862 when he resigned due to poor health and returned to Troup County. Soldiers often instructed those at home to send letters to them addressed in care of their commanding officer.

Many thanks to Keith Bohannon, co-editor of A GEORGIAN WITH “OLD STONEWALL“ IN VIRGINIA, and to Mr. E. James Miles for correspondence that provided the above information.
Posted by Vimala at 9:00 PM